Phase I of the Saluda Riverwalk, which included the Boyd Foundation’s project, the Sanctuary at Boyd Island, was completed in 2021. The Saluda Riverwalk project was funded with funds collected by Richland County through the “Penny” transportation sales tax program.

Phase II of the Riverwalk was the anticipated second leg of the riverwalk, continuing the Saluda Riverwalk up the Broad River to a pedestrian bridge across the Broad, effectively connecting the Saluda/Broad Riverwalks with the Columbia Canal Riverwalk (see map below).  Unfortunately, by the time Phase I was completed funding for Phase II became questionable, to the point of jeopardizing even the start of Phase II.

In the Fall of 2021 the Boyd Foundation, working through the River Alliance, made a proposal to Richland County-if the County would provide $2.2Million in funding for the completion of the Broad River Riverwalk from Boyd Island to the location of the bulkhead of the proposed pedestrian bridge, the Foundation would fund up to $3.2 Million of the anticipated cost of the pedestrian bridge. Richland County quickly agreed to the terms of the proposal.

The bridge has been designed (see concept drawing below) and the permitting process is well underway. It is hoped that all required permits will be in hand by the end of the first quarter of 2023 and that construction of the pedestrian bridge will be completed by the end of 2023. 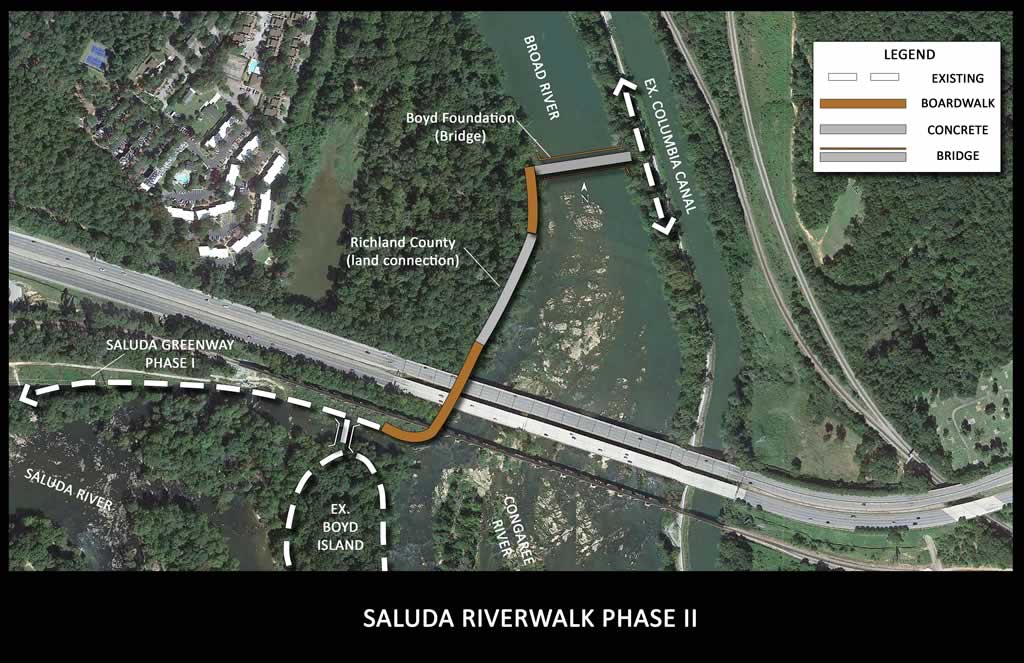 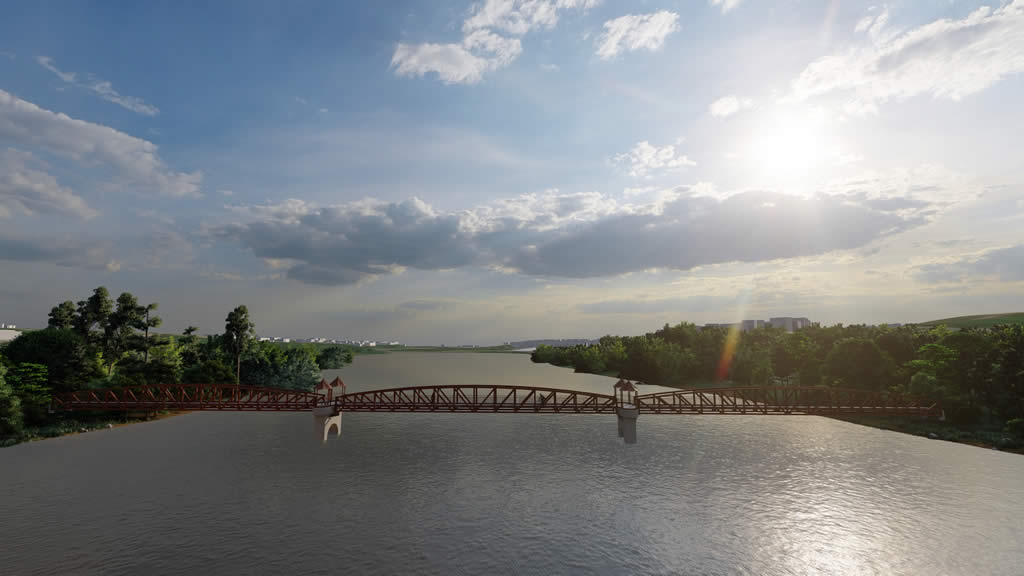 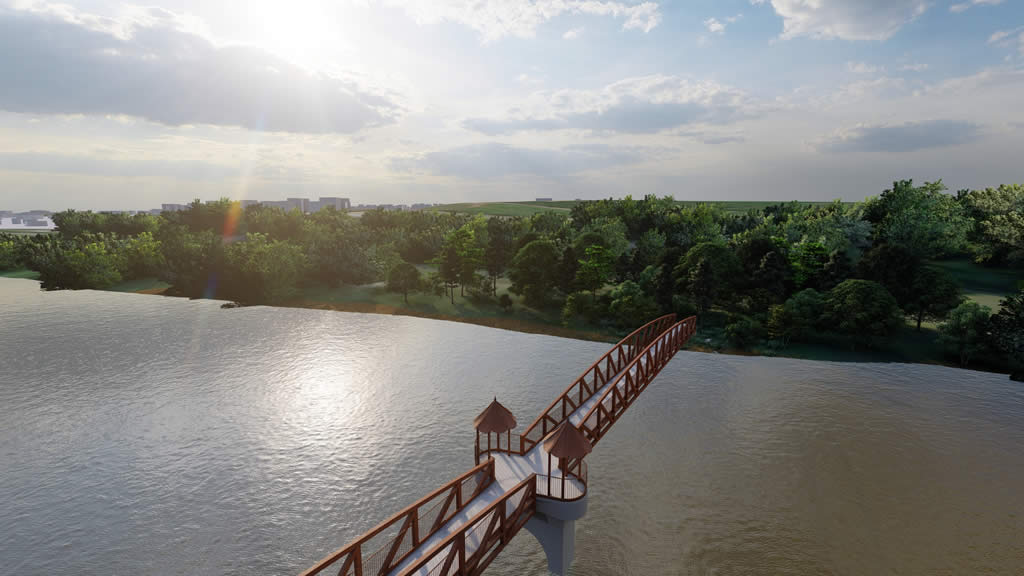 In late 2021 the Foundation was approached, after an introduction by Sam McGuckin,  by Chris Heivly and Joe Queenan on behalf of GrowCo Columbia, Inc. Their proposal was to create an environment in Columbia where technology-oriented people from all backgrounds and all experience levels could meet, collaborate and build high-tech, high-growth businesses with programing and mentoring support from others who have made the journey. The overall objective was to create a culture of entrepreneurship among technology-oriented people; to make the City of Columbia an attractive destination for high-tech companies with high-paying jobs.

The Boyd Foundation signed a Gift Agreement with GrowCo in June of 2022 agreeing to provide up to $1Million of funding for the creation and subsequent operation of the Boyd Community Innovation Center for two years. The Center will be a division of GrowCo Columbia, Inc., a South Carolina non-profit corporation which the IRS has determined to be tax-exempt pursuant to Internal Revenue Code Section 501(c)(3).

Chris Heivly, a cofounder of Mapquest, has been involved in nurturing technology-oriented people and developing and promoting the development of technology-oriented businesses in several cities, most notably Durham, North Carolina. Chris’ experience in Durham and elsewhere will serve as a foundation to guide the creation and operation of the Center. Joe Queenan is a 3X entrepreneur who has started three accelerators (corporate, university and social ventures) where he has mentored budding entrepreneurs from idea to exit. Joe will be hands on at the Center.

The Center will be run by an Executive Director and overseen by Chris, Joe Queenan and the Foundation.

The Center has already leased meeting space in Columbia and ordered furniture and fixtures. Interviews are being held for the Executive Director position. Floorplan (pdf)

When completed the Palmetto Trail will extend over 500 miles from Walhalla to Awendaw. The Trail is constructed as a series of “passages” that allow hikers to enjoy outings of varying distances. The southern portion of the Trail will extend from Columbia all the way to Awendaw. The southern portion of the Trail is complete except for three passages that are referred to as the Fort Jackson Passage, the Cook’s Mountain Passage and the Kensington Passage.
The Boyd Foundation has agreed to fund up to $1.506 Million to the Palmetto Conservation Foundation/Palmetto Trail (“PCF”) for the completion of the southern portion of Trail, contingent upon PCF obtaining easements and rights of way from all affected property owners. Much of the work will be done by volunteers and AmeriCorps team members. The map below shows the location of the proposed additions to the Trail, including 3 alternative routes for the Kensington passage portion. PCF, with some already in hand, is working diligently to obtain the remaining easements or rights of way in order for the project to get underway.
Wateree to Fort Jackson Connection (pdf)

The Aquarium and Reptile Conservation Center (“ARC”, formerly the Aquarium and Reptile Center) opened at Riverbanks Zoo and Garden in November of 1989.  Since then it has become the most popular attraction at the Zoo.  With its popularity, the ARC has suffered from wear and tear over the past 30 years.  In 2020 the Foundation began discussions with Tommy Stringfellow (Executive Director) and Lochlan Wooten (COO) and other staff at the Zoo about a project to renovate the ARC.  GLMV Zoos, architects for the project, presented the Zoo and Foundation with two alternatives:  a “Return to Glory” plan, that would repair and upgrade the existing facility of a “Wicked Cool” plan that would completely reimagine the facility for an extraordinary guest experience that highlights the conservation work going on behind the scenes.  Although the “Wicked Cool” plan was projected to cost more than twice the “Return to Glory” plan, the Foundation decided the Zoo and Columbia should have something truly outstanding.  Some conceptual plans are included below.

The Sanctuary at Boyd Island

In 2010, Donny and Susan Boyd were approached by Mike Dawson and Ozzie Nagler on behalf of the River Alliance about the Alliance’s plans for a riverwalk along the Saluda River. The riverwalk, as planned, would ultimately span from the confluence of the Broad and Saluda Rivers all the way to the Lake Murray Dam and also connect to the Columbia Canal via a bridge over the Broad River.  The Boyd’s quickly zeroed in on what could be the star of the show, a seven-acre island where the two rivers come together to form the Congaree River.  After a canoe trip to the island and a walk along its banks, the Boyd’s committed to fund a bridge to the island, if the Saluda Riverwalk project came to fruition.  Fast forward 10 years, and it finally happened!  The Foundation funded the construction of a bridge to the Sanctuary at Boyd Island as well as walking trails, benches, and picnic tables.  Still in the works are a gazebo inspired by the endangered spider lily that lives in the Congaree as well as sculptural pieces that depict native wildlife. The Sanctuary at Boyd Island is now and will be even more so, the jewel of the Saluda.

The Taylor House, constructed between 1907 and 1908, is located at the corner of Senate and Marion Streets, and was once the winter home of Thomas and Susan Ames Taylor, Jr., grandparents of Susan Boyd.  Mr. Taylor, a prosperous businessman was the great-grandson of Colonel Thomas Taylor, a leader in the Revolutionary War whose land became a large portion of the City of Columbia.  In 1949 the Taylor Family donated the property to the Columbia Arts Association, which expanded and rehabilitated the Taylor House for use as the Columbia Museum of Art.  Since 2002 the property has been owned by the University of South Carolina, adjacent to the new School of Law.  The University chose to incorporate the Taylor House into its plans rather than demolish it.  Since 2016 the Foundation and the University have worked together to fund the rehabilitation of the Taylor House to become a home to the Rule of Law Collaborative, one of the leading interdisciplinary academic centers focused on the rule of law in the entire country.  The Center works with leaders from around the world in government, civil society, the private sector and academia to ensure that citizens’ rights are protected through the fair administration of justice and accountability of government actors.

Our coastlines, marshes and estuaries are among our most vulnerable landscapes.  Our coastal shorelines have been adversely impacted by the impact of wave energy, boat wakes, storm surges and sea level rise.  Since around 2018 The Nature Conservancy has been involved in “living shoreline” projects in South Carolina.  Living shoreline (“LS”) is a general name given to different means by which coastal shorelines are protected, restored, and enhanced by means of promoting natural elements.  The objective is to create a natural barrier between the ocean and marshland behind which tidal marshes can be regenerated and restored.  A LS will provide a frontline defense against damaging wave action and storm surges.  A LS creates an alternative to damaging methods of shoreline protection such as seawalls and rip rap that hopefully will be employed by governmental entities as well as individual property owners seeking to protect their property.  TNC currently has eight LS projects in South Carolina employing different techniques in different environments.

In 2019 TNC approached the Foundation about financial support for another LS project in South Carolina.  The objective was to create an LS in an area with exposure to the public to increase public and governmental awareness of the benefits of LSs.  The East Bay Park and Morgan Park areas of Georgetown SC were selected for the largest LS project in the state, over 3,000 feet of shoreline.  The project, begun in 2020 is anticipated to span 3 years, with an additional 4 years of follow-up monitoring.  Coastal Carolina University has been contracted to create a “before” baseline and to monitor the development and performance of the project.  Robinson Design Engineers has been contracted to provide engineering and contract management services throughout the project.

Read more about the Boyd Living Shoreline at http://nature.org/boydshoreline.